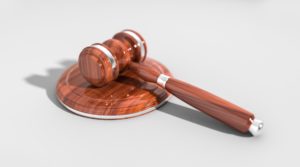 Under the Trademark Act, the US Patent and Trademark Office (“USPTO”) could prohibit the registration of trademarks that comprise derogatory or immoral or scandalous matter.

The barrier to derogatory marks fell in June, when the Supreme Court struck down the refusal by the USPTO to register the mark THE SLANTS for a California rock band on the grounds that “slant” was derogatory slang for people of Asian origin.  In Matal v. Tam, the Court ruled that the ban on derogatory marks violated the Free Speech clause of the US Constitution.

Now, the United States Court of Appeals for the Federal Circuit, in In re Brunetti has ruled that the Trademark Act prohibition on the registration of marks comprising immoral or scandalous matter is also an unconstitutional restriction of free speech.

In Brunetti, the Court agreed that the USPTO did not err in finding that the trademark FUCT comprises immoral or scandalous matter, acknowledging that “fuct” reads and sounds as the equivalent of “fucked”, and that, even by contemporary standards, is vulgar and profane.  Notwithstanding, the Court found that refusing registration of the trademark was barred by the Constitution.

It is settled law that any law or regulation that restricts the right of free speech must withstand “strict scrutiny”, and any content-based restriction is presumptively invalid.  The refusal to register FUCT was undeniably a refusal based on content, requiring the government to demonstrate that it had a compelling interest in restricting speech, and that the restriction was narrowly tailored to that interest.  Courts have identified national security, health and safety, protection of children, safeguarding the integrity of elections and the prevention of discrimination as compelling interests.

In support of its refusal, the USPTO argued that the Spending Clause of the Constitution gives Congress broad discretion to spend federal funds for the general public welfare, and to attach conditions to the use of government funds.  The USPTO argued that even though federal funds did not flow directly to a trademark applicant, support of the USPTO with federal funds amounted to a federal subsidy that justified the imposition of restrictions on the type of matter that could be registered as a trademark.

The Court disagreed, holding that government involvement in administering the trademark system is not a subsidy, because every government service requires some expenditure of government funds, and that, while the benefits of utilizing the federal trademark system are valuable, they do not amount to a subsidy, and are not analogous to a grant of funds.

What does this all mean?  It means that we will likely see the approval of applications to register more of the George Carlin’s Seven Dirty Words.