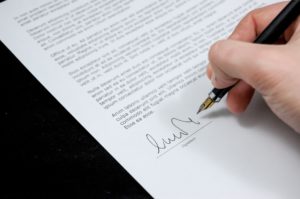 Drafting an Operating Agreement- Five Things to Think About

For a limited liability company, the operating agreement is the most important corporate document.  Every LLC with more than a single member should have an operating agreement; trying to function without one is like flying blind.

A well-drafted operating agreement governs the relationship among the members of an LLC.  It defines and describes the duties of the members; their rights and responsibilities; their shares of ownership, profits and losses; and provides an orderly mechanism for the admission of additional members and for the withdrawal of existing members in the event of retirement, death, disability or other incapacity.

Here are five things to think about before you begin the process of drafting an operating agreement:

If members will be involved in the management or operation of the business, the duties, as well as the limits of authority of each such member, should be clearly defined and described.  Think about whether and how you might want to relieve a member of operating responsibility in the event that he or she is not up to the task.  Reducing or eliminating a member’s operational role does not necessarily require a commensurate reduction in his or her ownership interest.  Members need not be directly involved in the management of an LLC; the members can hire one or more managers to manage day-to-day operations, and reserve for themselves the authority to function as a board of directors, setting policy and making higher-order decisions, such as whether to make distributions of profits and allocations of losses; seek outside financing, admit new members, or wind up the affairs of the LLC.

The profits of an LLC are allocated and taxable to members without regard to whether they are actually distributed.  Care must be taken to ensure cash distributions to members sufficient to pay income taxes on profits that are not actually distributed.  Members involved in the management and operation of an LLC also can be salaried employees of the LLC.  Payment of salaries reduces profits, but the tax consequences to members are the same; they pay income tax at their personal rates.

Ideally, an LLC will have an odd number of members, and matters will be decided by a majority vote.  But, where matters cannot be resolved by the vote of a majority, the operating agreement should prescribe how deadlocks can be resolved.  One method is to appoint a disinterested third party, such as the LLC regular accountant or attorney; another is to submit the matter to mediation or arbitration.  A third, more draconian, solution is to trigger the winding-up of the LLC in a process described in the operating agreement.

An operating agreement is a forward-looking document, designed to address eventualities that may or may not occur.  The founding members may have no intention of adding to their number, but the LLC may need additional capital; members may die or retire.  A good operating agreement will provide for these eventualities before they occur.  How will the decision to admit a new member be made?  By unanimous vote; majority vote or super-majority vote?  Will a capital contribution be required?  Must it be equal to the contributions of prior members?

There are any number of ways to answer the questions posed here.  The time to formulate those answers is in a discussion with your attorney and accountant, before an agreement is drafted.